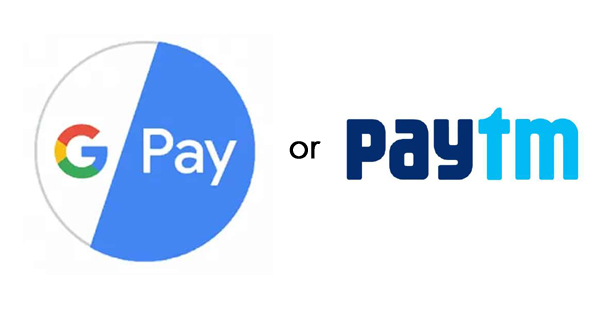 Google Pay Vs. Paytm: Which one Should I Use?

UPI transactions are common nowadays as they offer you a seamless online transaction process without paying any surcharges and a long waiting period. When it comes to UPI payment, two prominent names come to your mind, i.e., Paytm and GooglePay.

Undoubtedly, Google has created a monopoly, and hence you will find everything via Google products, GooglePay being one of them. With the launch of GooglePay, the competition for Paytm increased to the next level, and soon, many other competitors came into the competition.

Soon after PM Narendra Modi announced demonetization in 2016, the entire world came to a halt. However, Paytm made its presence and promoted digital India, becoming one of the greatest opportunities to grab a vast customer base and mark its presence across the country.

When Paytm was already ruling the market of digital India, Google also found an opportunity and hence introduced its TEZ application (today renamed to GooglePay) in 2017. Today (in 2021), Paytm has maintained its top UPI payment apps, whereas GooglePay is giving strong competition. However, for a first-time user, it's challenging to find the best one among the two.

The best way to choose one among two is to compare both based on different parameters.

KYC Compliance: KYC, aka Know Your Customer, is a one-time process required to open an account. KYC is mandatory as per RBI guidelines to ensure transactions are done between genuine people.

On the other hand, GooglePay doesn't have the KYC stage. Instead, you can directly install the application, and link UPI accounts to your phone.

Rewards & Cashback: Both the apps were offering great cashback during their initial days. Paytm was even giving 100% cashback after it was promoted post-demonetization. However, today Paytm provides you negligible cashback. Further, it gives you a scratch card that includes cashback on various brand-specific purchases.

GooglePay, on the other hand, still gives you decent cashback. However, the cashback count has declined with time as most of the UPI apps nowadays provide you with cashback vouchers instead of instant cashback in your wallet.

Ease of Doing Transactions: Paytm provides you with tons of other options alongside money transactions (through UPI). You just need to enter the mobile number and send money via the attached account for a UPI transaction. However, you can select the service and pay for it via Paytm wallet or the attached UPI account for other services.

In case of other services, e.g., mobile recharge, electricity bill, or gas booking, you need to select the account number and service provider.

On the other hand, GooglePay lets you select the receiver's phone number and send money directly from the attached account. In the case of other services, you just need to enter the account number, and the entire details are fetched automatically. In short, GooglePay offers ease of doing transactions compared to Paytm.

Pay Through Credit Card: Paytm is a giant UPI payment platform alongside other associated services like recharge, bill payment, online shopping, etc. With these features, Paytm allows you to make any transaction via Credit Card or Paytm Wallet. This saves you from the sudden need for soft cash when you don't have any in your bank account.

However, in GooglePay, you can make the transaction via Debit Card or UPI. This limits the usage of GooglePay for those who often use credit cards for their day-to-day transactions.

Multi-Language Support: Paytm provides you with a total of 11 languages to choose from (including English). Paytm is entirely built to grow within India and has offered nine regional languages, excluding Hindi and English.

On the other hand, GooglePay gives you only seven language options which are less than Paytm. Earlier, Paytm lacked the option to change language, which is now added to better compete with the competitors and reach broad customers across the country.

Undoubtedly, both the apps offer a user-friendly experience, Paytm is a bit faster than GooglePay. During a transition via GooglePay, you just need the recipient's mobile number, and the amount will be directly deducted from your bank account. With a one-time UPI PIN, you can complete the transaction. However, many customers complain about in-transaction glitches, which take time to roll back your amount.

Paytm allows you to use Credit Card, Debit Card, and UPI, which consume a bit more than GooglePay to make your choice and submit the card details as required. Yet, if you are only comparing both w.r.t. UPI transactions, Paytm ultimately gives you better speed.

Transaction Security: GooglePay and Paytm both have high-end safety when it comes to the transaction. Apart from UPI transactions, your transactions are made via Paytm Wallet that ensures your money is only deducted if the merchant account is valid and the transaction is all set to complete. Yet, Paytm provides you additional security by using its Paytm Wallet.

In case there is an issue in the transaction, the entire amount is saved in your Paytm Wallet. Interestingly, no such facility is available in GooglePay.

Direct Transaction From Bank: GooglePay doesn't have any dedicated wallet as an intermediate for the transactions. Hence, every time you send money to anyone, your amount is deducted from the bank and sent to the recipient's account.

However, you have to add money to Paytm Wallet every time you make any non-UPI transaction. This takes a bit more time than GooglePay. However, it adds transaction security (as mentioned in the previous point).

Available Services: GooglePay and Paytm have most of the services you can use to make your day-to-day operations, including rechange, train booking, gas booking, and many more. However, GooglePay works just as an intermediate to complete the entire process. It doesn't provide you with additional facilities.

On the contrary, Paytm has numerous by-products like Paytm Money, Paytm Mall, and others that provide add-on facilities. Numerous facilities like investing in mutual funds, buying digital gold, opening & trading with a Demat account, purchasing from Paytm Mall, etc., are also available with Paytm. With this, Paytm provides you with a broad range of services that aren't available in GooglePay.

In short, GooglePay is just a platform to make transactions, whereas Paytm is an entity-cum-platform that provides you a payment platform along with numerous other services.

Below are the descriptive features of GooglePay and Paytm

GooglePay has more than 100,000,000 downloads on Android smartphones and has given an aggregate rating of 4.1. On the other hand, Paytm also has the same downloads supported with 4.5 ratings.

This clearly shows how Paytm is ruling the digital market and has outranked other competitors in the market. Since demonetization happened in 2016, Paytm QR Stickers are seen at most shops that take it one step ahead of the competitors. Recently Paytm introduced the All-in-One QR Code, which allows you to pay through any UPI application you own. This further expands the scope of Paytm and makes it the king of digital payment.

A Brief About Paytm: Paytm is a product of One97 Communications Limited, which Vijay Shekhar Sharma owns. The company is headquartered in Noida, UP. Paytm was introduced in 2010. It has multiple investors in its bucket, including Softbank, Ant Financial, AGH Holdings, SAIF Partners, Berkshire Hathaway, T Rowe Price, and Discovery Capital.

Alongside Paytm, other products of One97 Communications include Paytm Money, Paytm Games, Paytm Mall, Paytm Insurance, and many more. In short, Paytm is an Indian company that you can rely on.

On the other hand, GooglePay doesn’t need any introduction. A product of Google, GooglePay was initially introduced as the TEZ app (back in 2017), which was later renamed to GooglePay.

With that said, you can now read this detailed and 100% transparent comparison between GooglePay and Paytm. Based on the above-compared pointers, you can select which one to choose and start enjoying the digital payment era.

Knowing the Positives and Negatives of Opting for Home Loans

Exploring the Top Gains of Turning to Personal Loans

Why Investing in Exchange Traded Funds is the Right Decision for Unskilled Investors?

How to cope with Debt during job loss

Exploring the Major Effects of Inflation on Borrowers

Analyzing the Strength and Weaknesses of Low-interest Rates for Loans

How to Manage debt during job loss